Arthur Ashe | Tennis Player | 1943-1993
Ashe's resume includes three Grand Slam titles and the title of the first black player selected to the United States Davis Cup team and the only black man ever to win the singles title at Wimbledon, the US Open, and the Australian Open. In July 1979, Ashe suffered a heart attack while holding a tennis clinic in New York. His high profile drew attention to his condition, specifically to the hereditary aspect of heart disease. In 1992, Ashe was diagnosed with HIV; he and his doctors believed he contracted the virus from blood transfusions he received during his second heart surgery. After Ashe went public with his illness, he founded the Arthur Ashe Foundation for the Defeat of AIDS, working to raise awareness about the disease and advocated teaching safe sex education. On June 20, 1993, Ashe was posthumously awarded the Presidential Medal of Freedom by President Bill Clinton. 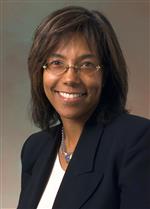 In 1993, the University of Michigan named Dr. Claudia Alender its Woman of the Year. A decade later, she received the Emerald Honor for Women of Color in Research & Engineering from Career Communications Group, publisher of Black Engineer and Information Technology Magazine, and she was featured in a 2007 article in Black Enterprise Magazine.

Claudia Alexander, a space scientist, didn't always have stars in her eyes. There was a time she wanted to be a journalist. "But my parents were convinced engineering was the answer! I found it was a lot more fun to think about the flow of water in a river than water in the city sewer, so I went into Earth science and got a bachelor's in geophysics at UC-Berkeley." Alexander moved on for a master's in geophysics and space physics at UCLA, and a Michigan Engineering PhD in Atmospheric, Oceanic and Space Sciences, specializing in space plasma. It turned out to be a good path. "I love working in the space program on one-of-a-kind engineering applications, like flying spacecraft, which is really a team effort. There are so many aspects of keeping a piece of engineering working and operating when it's thousands of kilometers away from you. The ingenuity required is amazing."

Her legacy lives on. In 2015, the scientists of the Rosetta mission found a new feature on comet 67P/Churyumov-Gerasimenko, nam ing it the "C. Alexander Gate" in her honor. 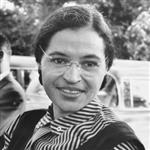 Most people think of Rosa Parks as the first person to refuse to give up their seat on a bus in Montgomery, Alabama. There were actually several women who came before her; one of whom was Claudette Colvin.

It was March 2, 1955, when the fifteen-year-old schoolgirl refused to move to the back of the bus, nine months before Rosa Parks’ stand that launched the Montgomery bus boycott. Claudette had been studying Black leaders like Harriet Tubman in her segregated school, those conversations had led to discussions around the current day Jim Crow laws they were all experiencing. When the bus driver ordered Claudette to get up, she refused, “It felt like Sojourner Truth was on one side pushing me down, and Harriet Tubman was on the other side of me pushing me down. I couldn't get up."

Claudette Colvin’s stand didn’t stop there. Arrested and thrown in jail, she was one of four women who challenged the segregation law in court. If Browder v. Gayle became the court case that successfully overturned bus segregation laws in both Montgomery and Alabama, why has Claudette’s story been largely forgotten? At the time, the NAACP and other Black organizations felt Rosa Parks made a better icon for the movement than a teenager. As an adult with the right look, Rosa Parks was also the secretary of the NAACP, and was both well-known and respected – people would associate her with the middle class and that would attract support for the cause. But the struggle to end segregation was often fought by young people, more than half of which were women.

Frank Robinson (August 31, 1935 – February 7, 2019) was an American professional baseball outfielder and manage r in Major League Baseball (MLB) who played for five teams, from 1956 to 1976. The only player to be named Most Valuable Player (MVP) of both the National League (NL) and the American League (AL), he was named the NL MVP after leading the Cincinnati Reds to the pennant in 1961 and was named the AL MVP in 1966 with the Baltimore Orioles after winning the Triple Crown; Robinson's 49 home runs (HR) that year tied for the most by any AL player between 1962 and 1989, and stood as a franchise record for 30 years. He helped lead the Orioles to the first two World Series titles in franchise history in 1966 and 1970, and was named the Series MVP in 1966 after leading the Orioles to a four-game sweep of the Los Angeles Dodgers. In 1975, Robinson became the first black manager in big league history, as the Cleveland Indians’ player-manager.

Robinson went on to manage the San Francisco Giants, Baltimore Orioles, and Montreal Expos/Washington Nationals.[2] For most of the last two decades of his life, Robinson served in various executive positions for Major League Baseball concluding his career as honorary President of the American League.[3]

Pinckney Benton Stewart Pinchback (born Pinckney Benton Stewart,[citation needed] May 10, 1837 – December 21, 1921) was an American publisher and politician, a Union Army officer, and the first African American to become governor of a U.S. state. A Republican, Pinchback served as the 24th Governor of Louisiana from December 9, 1872, to January 13, 1873. He was one of the most prominent African-American officeholders during the Reconstruction Era.

Pinchback was born free in Macon, Georgia to Eliza Stewart, a freed mulatto woman, and William Pinchback, a white planter. His father raised the younger Pinchback and his siblings as his own children on his large plantation in Mississippi. After the death of his father in 1848, his mother took Pinchback and siblings to the free state of Ohio to ensure their continued freedom. After the start of the American Civil War, Pinchback traveled to Union-occupied New Orleans. There he raised several companies for the 1st Louisiana Native Guard, and became one of the few African Americans commissioned as officers in the Union Army.

Pinchback remained in New Orleans after the Civil War, becoming active in Republican politics. He won election to the Louisiana State Senate in 1868 and became the president pro tempore of the state senate. He became the acting Lieutenant Governor of Louisiana upon the death of Oscar Dunn in 1871 and briefly served as Governor of Louisiana after Henry C. Warmoth was suspended from office. He was the first African American to serve as a US governor. African Americans were increasingly disenfranchised  in the South at the turn of the 20th century; Pinchback was the only African American to serve as governor of a U.S. state until Douglas Wilder became governor of Virginia in 1990. After the contested 1872 Louisiana gubernatorial election, Republican legislators elected Pinchback to the United States Senate. Due to the controversy over the 1872 elections in the state, which were challenged by white Democrats, Pinchback was never seated in Congress.

This weekend is Superbowl Sunday and our Black History Month spotlight is on George Taliaferro - George Taliaferro (January 8, 1927 – October 8, 2018) was a professional American football player who was the first African American drafted by a National Football League (NFL) team. Beginning his football career at Indiana University for the Hoosiers team, he played in the NFL for the New York Yanks from 1950 to 1951, the Dallas Texans in 1952, the Baltimore Colts from 1953 to 1954, and Philadelphia Eagles in 1955.

As the leading rusher and an All-American at Indiana University, he led the Hoosiers team to their only undefeated Big Ten Conference championship. He was a three-time All-American, Taliaferro led the Hoosiers in rushing twice, punting in 1945 and passing in 1948. Taliaferro helped break the color barrier in sports, playing for the Hoosiers two years before Jackie Robinson suited up for the Brooklyn Dodgers. He was inducted into the College Football Hall of Fame in 1981. 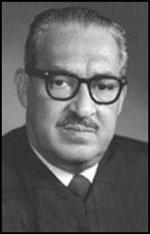 Thurgood Marshall—perhaps best known as the first African American Supreme Court justice—played an instrumental role in promoting racial equality during the civil rights movement. As a practicing attorney, Marshall argued a record-breaking 32 cases before the Supreme Court, winning 29 of them. In fact, Marshall represented and won more cases before the high court than any other person. During his 24-year term as Supreme Court justice, Marshall’s passionate support for individual and civil rights guided his policies and decisions. Most historians regard him as an influential figure in shaping social policies and upholding laws to protect minorities. 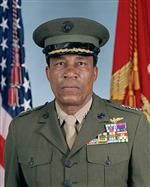 “[He was] a pioneer and role model in many ways, a stellar leader, Marine officer and aviator.” said Gen. John M. Paxton, Jr., the 33rd Assistant Commandant of the Marine Corps.

Born March 2, 1932 in Topeka, Kansas, Petersen was commissioned in the Marine Corps in 1952 after serving two years in the U.S. Navy. Petersen served during the Korean War in 1953 and Vietnam in 1968. During his career, Petersen flew more than 350 combat missions and more than 4,000 hours in various military aircraft.

Petersen was promoted to brigadier general on Feb. 23, 1979, becoming the first African-American to hold that rank in the Marine Corps.

His actions were recorded in the Congressional Records as part of the archives of the House of Representatives on July 28, 2014, where they will be preserved forever.

- source - The official website of the United States Marine Corps 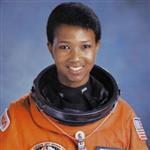 When Jemison finally flew into space on September 12, 1992, with six other astronauts aboard the Endeavour on mission STS47, she became the first African American woman in space.

During her eight days in space, Jemison conducted experiments on weightlessness and motion sickness on the crew and herself. In all, she spent more than 190 hours in space before returning to Earth on September 20, 1992. Following her historic flight, Jemison noted that society should recognize how much both women and members of other minority groups can contribute if given the opportunity.

Honors
In recognition of her accomplishments, Jemison received a number of accolades, including several honorary doctorates, the 1988 Essence Science and Technology Award, the Ebony Black Achievement Award in 1992 and a Montgomery Fellowship from Dartmouth College in 1993. She was also named Gamma Sigma Gamma Woman of the Year in 1990. In 1992, the Mae C. Jemison Academy, an alternative public school in Detroit, Michigan, was named after her.

Boxing legend Muhammad Ali once called Hank Aaron “The only man I idolize more than myself. ”

For many, Aaron was everything an athlete – and a human being – should be.

Aaron grew up in humble surroundings in Mobile, Ala. He passed through the sandlots with brief stops in the Negro Leagues and the minor leagues before he settled in with the Braves, where he ultimately became one of baseball’s most iconic figures.

He was a consistent producer both at the plate and in the field, reaching the .300 mark in batting 14 times, 30 home runs 15 times, 90 RBI 16 times and captured three Gold Glove Awards en-route to 25 All-Star Game selections.

Nineteen fifty-seven was arguably Aaron’s best season. He hit .322 that year with 44 home runs and 132 RBI, captured the National League MVP Award and led the Braves to their first World Series Championship since 1914.

Despite his consistent production, it wasn’t until 1973 that Aaron was thrust into the national spotlight as he neared the finish of a successful assault on one of sport’s most cherished records: Babe Ruth’s mark of 714 home runs. It was on April 8, 1974, that Hammerin’ Hank sent a 1-0 pitch from Dodgers hurler Al Downing into the left field bullpen at Atlanta-Fulton Count Stadium, giving Aaron 715 career home runs. He would finish his career with 755.