Elementary Activity Hallways help students get "the wiggles" out

When administrators of Conway Elementary School approached Graphic Imaging/Printing Teacher Susan Caldwell of North Stafford High School about implementing an activity hallway in the school, they had a feeling they were dealing with something bigger than a simple playspace. They were right.

While the hallways were initially the school administrator’s idea, they would be impossible without Susan Caldwell and her team of talented students. Although Caldwell is the link between the principals and the implementation of the hallways, her students are crucial to the design, planning, and final placement.

“It [a project] usually starts with an email; we’ll have a little pow-wow and come up with our ideas for the client, using what they envision seeing on their floor,” Caldwell said. “We’ll create from there.”

Over the summer, Caldwell hired a team of these spectacular students to make sure that Conway Elementary’s hallway was ready for the students in time for the new year. They worked tirelessly to design and place the hallway, getting paid for their specialized work.

Having these hallways initially seemed like a simple thing, meant to engage and entertain students when they get disruptive or antsy and need some time to get their energy out in an educational way. However, the individuals working on putting the hallway together quickly learned that there’s much more to space than a simple indoor play area.

Caldwell recounts an experience she had when working over the summer where autistic children immediately formed a bond with the hallway. While the graphic imaging/printing students were in the process of putting up the first hallway over the summer, they had a very special experience with the students there for summer activities. There are little handprints on the wall for one of the exercises and as the children tried to engage, they found that, at one height level, the prints were too short and too tall for some students. To solve the issue, those placing the brick wraps (what the wall section of the hallways are made of) adjusted the prints to the heights of the various children trying to engage.

“I went over to Conway when they [the design students] were installing it [the hallway]; They had a little summer camp for autistic kids, and we were trying to finish the installation and the kids wanted to play on it right then and there. We actually had them come out and help us install it by showing us how high their hands were when we were putting the handprints on the wall,” Caldwell said.

This is not the first time the North Stafford design program has completed work for Stafford County schools. A majority of the printed media throughout the schools (laminate decals on floors, brick wraps, window wraps, door wraps, etc.) was completed by this team.

“All the elementary schools will get a floor wrap, a couple of middle schools have expressed interest in getting a floor wrap (for anti-bullying, etc.) and we are currently working on one here at North Stafford,” Caldwell said. “Every school we’ve hit and we’ve done something”.

Currently, there are plans for four more hallways planned for Rockhill, Grafton Village, Hampton Oaks, and Hartwood. The county hopes to have these hallways in all 17 elementary schools. 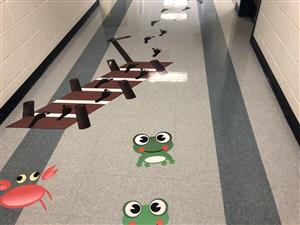