Stafford County Public School’s (SCPS) Coordinator of Fine and Performing Arts, Annamarie Bollino, has made considerable progress in bridging the gap between those at the Alvin York Bandy Administrative Complex (Bandy) and the SCPS community of students, parents, and teachers.

Her success in building relationships stems from her background as an educator. While receiving her Bachelors in Music Education from West Virginia University, she realized she wanted not just to be a teacher, but to eventually become an administrator.

“I wanted to be able to make a bigger impact. I also really enjoy what we call the Arts Management side; kind of the behind the scenes work… for me, it sounds silly, but I don’t mind the paperwork,” Bollino said while laughing. “Somebody has to do that, so a lot of what I do is manage big events and oversee programs.”

While she initially pursued training in education, she eventually became the Coordinator of Fine and Performing Arts because of her experience and passion for the Arts. To support this, she received an Administration and Supervision license from Virginia Commonwealth University. Bollino has been involved with the Fine Arts, specifically Dance and Music, since she was five years old taking dance classes and organ lessons at her church. In high school, she was involved with the school band.

“I started to see the value and the fun in playing the organ at my church. I’m a marching band kid, so I had that sense of community,” says Bollino.

Her efforts and passion combined seamlessly at The Eighteenth Annual School Board Office Art Exhibition. As she became more aware of the gap between the public and SCPS administration, she wanted to find a way to bring the two together beyond the annual exhibition.

Bollino noted that in the year following a showcase before the art was updated for the next year, people would stop her and tell her how moved they were by certain art pieces and how much the pieces improved the conditions of Bandy.

“When we change up the show every year, we have so many colleagues and coworkers in Bandy who come up to me and say ‘Oh my gosh, we love this new picture you put up in the hallway,’”says Bollino.

She quickly realized she was receiving praise for artists work and they had no way of knowing how important their work had become to the people who saw it daily. Her solution to this problem? Letters.

“The art has such an impact on people who work with me, and so we decided, this year, on a large scale, to actually invite all of the people who work in the complex to write notes to the artists,” says Bollino.

During this year’s showcase, next to every piece of artwork there was a little yellow envelope. The purpose of the envelope was to allow those who saw pieces and wanted to articulate their appreciation to write notes to the artists. Seeing the impact this had on students was emotional to Bollino.

“The students and the parents were just so moved by the letters and the memento that they received… it was a way for us to engage with the community in a way that we often don’t, and so I just enjoyed that part of the evening because it was something we hadn’t really tried before and it was really well received,” says Bollino. 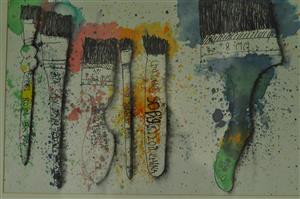